A Robbery at our office

At first sight, haphazard will be the keyword running through the mind already strengthening your predefined notions of a government office. Files strewn about here and there and everywhere. Interestingly, these files, which contain information ranging from the useless to the utterly useless come in a variety of colors: Pink and pink and wait I almost forgot: pink Walls covered with colors so atrocious, it can cure you of color blindness. The roof leaking to the hilt; to the extent that Sir M Visvesvaraya could have generated electricity out of it.

And then come the people. The people who complete the office. Yes the same perennially bored looking people who give you a shrewd/crooked/overly warm reserved only for relatives/tepid/condescending smile depending on the time of day and your position in society.

And thus we have the much frowned upon government office. Now to negate everything I said above, our office is not half as bad as a regular government office. Although certainly not avant-garde in its design, it is in tune with modern tastes insofar as it has a working water cooler.

As I was making my way yesterday to my simple yet comfortable office space, I was met with an unusual swell. My office attender Babu was laying still on the steps leading to the office, eyes wide open, face lit with an equally wide grin. It was more of a ” main lottery jeeth gaya” look.
I asked him what had happened.
“Sir, kallatana( robbery) at our office last night”
What? Really?
” haha yes sir”
You seem to be thrilled about it.
” what else to do sir, today office is going to open only after the cops come over which is going to take forever”
Don’t talk like that. It is our office you are talking about. As if you do something productive during office hours. Yesterday I spotted you exchanging sudoku clues with Ramu.
(Despite the serious act, I was doing the Bharatanatyam inside my head)

When I made my way upstairs, the scene that lay waiting for me wasn’t any less forgiving. All our employees stood in a trance like position. Some of them broke into hysteric laughter sporadically. Most of them even had the “oh give thanks to the lord for he is good” look. Only the divisional manager looked ashen.

One senior employee suddenly felt obligated to ask that annoying generic question usually in circulation whenever a robbery takes place: “Has anybody informed the police?” (Similar questions in dissimilar situations include: have you called the doctor? Have you called the ambulance? Have you come to watch a movie?)

No, we’d contacted shaktimaan instead. Duh.
After a while(like 34 million hours later) the police came, led by the redoubtable deputy superintendent himself. Unimpressed with his posse, he called for
an additional team replete with a sniffer dog.

Glued to the scene as if an excavation was going on, the entire staff stood on the tips of their feet waiting for the nail biting climax.The deputy after fiddling with the broken locks for eternity looked as clueless as we were. However he managed to enlighten us with his deep rooted wisdom:
“Looks like this is the work of robbers”
You don’t say?
The arrival of the police is also the arrival of tension culminating in the expulsion of logic. Mystified as we were by the day’s happenings, forced were we to reply in unison with an
“Ooooooo” to the grain of wisdom shared by the deputy.

And then came the turn of the sniffer dog Dharma. Originally meant to be a German shepherd, Dharma turned out to be a cross between a tiger and a black panther. Now I was familiar with Dharma. I had helped secure a pet dog insurance policy for her a while ago. And I knew her handler as well. So she started sniffing at me first.

What do you do when a hybrid tiger starts sniffing the lower part of your body? Further what do you do when its handler recognizes you and tries to strike a normal conversation with you at the same time?
Let me leave these questions unanswered.

In the end, we discovered that only 30,000 rupees in our forlorn locker had been stolen. But the mystery didn’t end there. The robbers had left a 2 rupee coin behind. Why?
To which babu replied:
” Maybe they mean to say that we are 2 rupees people” 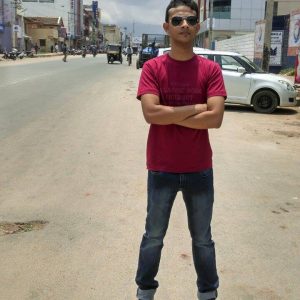 Administrative officer in a prominent Govt of India Company who carries within him a visceral hatred towards Yo Yo Honey Singh. Writes only for the fear of losing his thoughts to oblivion. Wants to get a PhD from Indian Institute of sarcasm.